Sorry I haven't posted for a couple days. We've had problems staying under our internet allowance, and communication from mission support comes before blogging. Now it seems to be under control but I've been busy! I'm trying to keep notes (or mental ones) so I can still make a post for each day. They won't go up until I get back, so bear with me.

Today my blog was featured on sfsignal.com!

We are also going to do a reddit "Ask Me Anything" this afternoon (3 pm Mountain Time, 5pm EST). I'll update this post with the link once we get started.

If you want more detail about our days here, you should go to Derek's blog. He's written good reports that are a different style than my writing.

We are considering writing a letter to all our congressmen, briefly describing our experience here and urging them to support science funding. Any suggestions or advice? It would be a challenge to keep the letter short while still conveying all the things we want to talk about.

For Christmas day, we are going to cook up a rehydrated feast. The film crew will be here for our small celebration. Since they leave the day after, we'll also be celebrating their company and the future film along with Christmas.


LINK TO REDDIT
http://www.reddit.com/r/AMA/comments/15e63c/we_are_crew_120_currently_stationed_at_the_mars/
Posted by Unknown at 12:27 PM 5 comments:

I awoke around 9 this morning to raucous laughter in the hab. Clearly, I forgot to set my alarm! I pulled on a second layer of clothes to go into the main room and soon heard discussions of an EVA. This was great news because we've been snowed in for days now, I'm not sure how many. It was quickly decided that Erick and I should go on a one hour scouting EVA to determine the slipperiness of the remaining ice and snow. I scarfed down a bowl of cereal and half a cup of coffee. We suited up and got out of the airlock by 9:45.

We found four different terrains between the hab and Teetering Rock, the hopeful location of the next full EVA. Snow and dry ground were completely fine to walk on (green light). There was bumpy ice which was okay but not ideal (yellow warning). The bumpy ice looked really cool and seemed to be formed by wind. In low areas, there were small streams of ice. They were very slick but not very wide (caution needed).

We turned around near the 30 minute mark and headed back to the hab. We briefed the rest of the crew on the conditions and suggested they walk slowly and go single file across the bad patches.

The crew fixed soup for lunch while Erick and I were gone. I didn't think tuna in chicken noodle soup would be good, but it was! After lunch, we sent EVA 005 out and then I caught my breath. It was a hectic morning!

Here are some pictures: 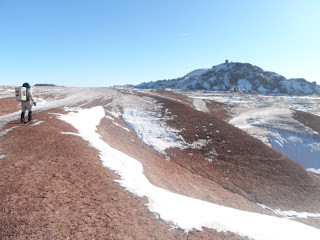 Erick on a hill top near Teetering Rock. 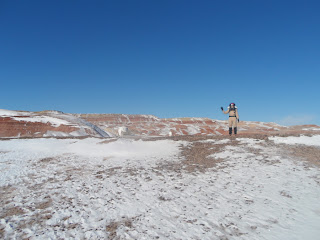 Me waving, "Hi Earth!" with the hab in the background.
Posted by Unknown at 10:31 AM No comments:

Yesterday was my 23rd birthday! Everyone was really sweet with birthday wishes and dinner. Derek cooked a great meal as usual, and we had an excuse to celebrate with good brownies and delicious homemade space ice cream (John's special recipe).

I was waiting all day for it to be dark- good thing it was the day with the least amount of sunlight in the whole year! I stumbled across a note in Diane's CCD photometry pamphlet about using DSLR cameras and got inspired. After a day of reading about astrophotography with DSLRs I was excited to go observing. We went out for a bit in the early evening and then again at 4:30 this morning. We tried to catch a variable star to measure with the CCD, but clouds and cold temperatures made it difficult. We are getting better at aligning the telescope - we did it in a record 35 minutes this morning!

Here are my first attempts to photograph the heavens. Don't have high expectations. 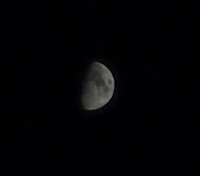 The moon is the only object big enough to use autofocus (but it doesn't focus well). I ran across a website that said you should photograph the moon as if you're in full sunlight because the moon is in full sunlight. Diane's friend gave me some advice via email - you should use large aperture. Does that mean large aperture opening or large f number? 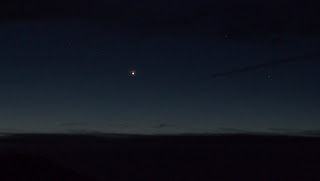 This is a picture of Saturn taken in the early morning with a long exposure. Sunlight is starting to lighten the sky and a couple clouds were up near the horizon. It was a beautiful dawn, but so so cold! 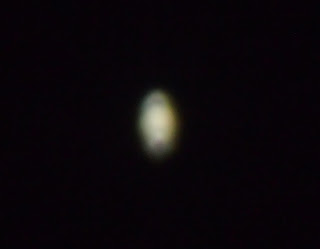 
The astrophotography is really fun. I may have to invest in a tripod so I can continue the hobby after this trip. I need to get better at manually focusing. It should be easier to play with settings when my fingers aren't frozen...

Today is another day stuck inside. I wish I had move EVA adventures to write about. The forecast for the next week is sadly cloudy, so we may not be able to do as much observing either. What can we do? What would actual colonists on Mars do if they were stuck waiting for good conditions?
Posted by Unknown at 11:50 AM No comments:

Another snow day - it didn't get warm enough to melt all the ice and snow.

April and Diane made delicious potato pancakes this morning - mashed potato gems with ham flavored TVP cooked on a griddle with some oil. Awesome.

We caught up on dishes and cleaned upstairs. The hab floor was vacuumed and mopped (still doesn't look clean) and the floor turned a few shades bluer. We have a lot of dust and dirt here.

April continued with her rock analysis and Diane and I had a good observing session. Although it's 4 degrees F outside, the sky is clear and the telescope is aligned and focused! We had a couple variable stars to look at, but missed the 8:30 and 10:30 ones. Diane is going to wake up and catch one at 5:30 using the CCD camera.

We've stayed up much too late and tomorrow we are supposed to start enforcing the wake up time... zzz...
Posted by Unknown at 12:35 AM No comments:

Yesterday (day five) was a snow day. We were stuck inside until the rover got stuck outside and we had to have a unscheduled EVA to retrieve it!

It was a day filled with lots of writing, tea drinking, and science! April and I worked in the lab a little bit. One strange, rock I picked up fizzed when HCl came into contact. That means it's either limestone or a fossil. My rock might be ancient, dead sea creatures!

We finally got clear skies, so at dusk Diane, Erick, and I went to the observatory. We fixed all the issues we had been having - alignment between the finder scopes and the telescope and the telescope's alignment procedure. Everybody (including the film crew) looked at the Moon, Jupiter, Alberio, and the Ring Nebula. Then Diane figured out the camera and imaging process and got a neat photo of Andromeda.
Posted by Unknown at 10:34 AM No comments:

Here are some pictures from EVA 003: 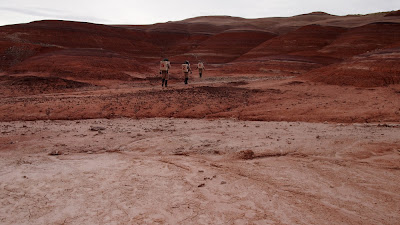 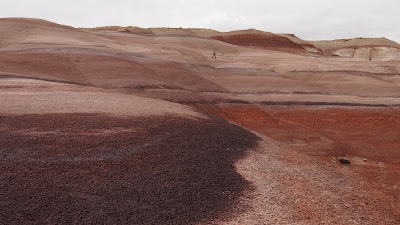 April is backpack 6, Derek is 5, and Erick is 2. I did not color enhance these photos!


After going through beautiful red hills, we visited a sight found by EVA 001. We wanted to further investigate a rock pattern that looked like a impact crater and a weird shape that looked like a footprint. We found the site- which is a huge feat since Mars is a vast planet, we left no markers, and it was a small feature. There were more of the same shapes seen all around the area. We thought the raised rock features resembled coral.

The film crew put mics on the inside of our helmets and followed us around during the EVA. It was great that we only noticed them a couple of times. Their presence did not ruin the simulation mindset! 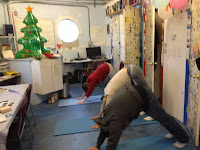 After returning from the EVA we talked with the film crew about what we do here and what people on Mars might do in the future. We had leftover lunch and tea to warm up. Then Diane, Erick, and I did some yoga on spare camping mats. Very helpful for shoulders sore from carrying packs!


Our Christmas tree is inflated and we're in the holiday spirit!
Posted by Unknown at 11:29 PM 1 comment:

I am a physics graduate student at Carnegie Mellon University. I am participating in Crew 120 (Campus Martius) of the Mars Society's Mars Desert Research Station in Hanksville, Utah.
I would love to answer questions and hear comments, so don't be shy!